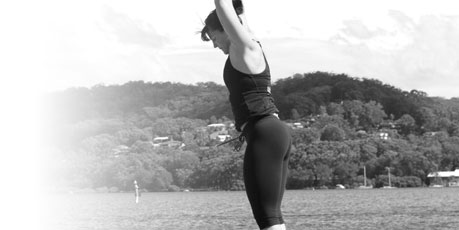 How it all began - my story

My love of health and fitness began in 1993. I am NOT naturally sporty or athletic, and it all started with the very happy occasion of my big sister getting engaged. Squeals of excitement at the announcement that I was one of the bridesmaids, until we went dress shopping. To my surprise I discovered that I did not fit into a size 16 bridesmaids dress.

My fitness journey began literally the next day. Like most people, the first thing I did was clean up my eating. As happens with most of us, this produced a relatively fast result of about 8 kilos of scales weight loss. I had no real idea about what food was "good" and what was "bad" and have educated myself a lot since those days. These days I NEVER think about how much I weigh on the scales (as I've learnt that this not a true representation of anything), but back then, this was the only way I knew to measure results.

After my initial "weight" loss I then discovered – wow – I actually liked exercising!! It's funny because this is how it happens for most of us, we discover that the combination of healthy eating AND exercise makes for quite a spectacular reaction from our body and that's exactly what happened for me. I discovered how much better I felt when I ate healthy food AND THEN I added exercise to the mix which was when the AMAZING stuff happened!!

I did a year or so of traditional gym training, then I discovered martial arts by starting Tae Kwondo which is when my real love of HEALTH and FITNESS blossomed. This began a martial arts journey for me and after 7 years of very hard work (much blood, sweat and more than a few tears) I achieved at the age of 32, my First Degree Black Belt in Tae Kwondo.

By 2003 my enthusiasm to share my passion for fitness was off the charts, so that year I gained my first qualification in the Fitness Industry, which enabled me to pass this passion on to others. This saw me training people early in the morning and at night in traditional gyms, while I still maintained my full time day job in an office.

My love of martial arts continued for many years, and led me to meet my late husband Daran in 2008. He had just opened one of the first kickboxing/MMA/functional training gyms on the Central Coast and it was called Edge 1st Fitness. I became co-owner of Edge 1st Fitness by late 2008 and became very passionate about not only functional training, but also kickboxing. I went on to have my first kickboxing fight at the age of 40 and we added one of the first Pole Fitness classes on the Central Coast to Edge 1st Fitness, which was also run by me too!

In February 2011 the gym was sold to one of my amazing and still closest friends and at this point that I shifted from my focus of INDOOR functional training, to OUTDOOR functional training which is where Matrix Health and Fitness began. An interesting side note, Matrix Health and Fitness actually begun its infancy in late 2010 and was initially known as Boot Camps Australia Central Coast.

What other cool stuff have I done? Well, I'm a qualified Hairdresser, I've dabbled in Roller Derby, competed in a Figure/Bodybuilding Competition just to name a few. The thing is, and I tell people this all the time... There is no ONE activity that every single person in the world will enjoy.

It's simply about finding your "thing" - and doing it with everything you have as often as possible. Quite simply, move your arse everyday and move it by doing something you love.

Well, that's the short version of my story. If you would like more about Matrix Health and Fitness please contact me either by email [email protected] or call 0412 012 952. I'd love to help you make the choice to be the fittest, healthiest person you can be.